Effects of Bronchiolitis in Winter

Previous Next
Effects of Bronchiolitis in Winter
Share This Story

Is your baby facing symptoms like severe cough, runny nose, wheezing and cold, it can be due to bronchiolitis. Bronchiolitis is a common winter problem which affects your kids particularly children under age 2 year. Let us learn about bronchiolitis, its symptoms and its effects on children. 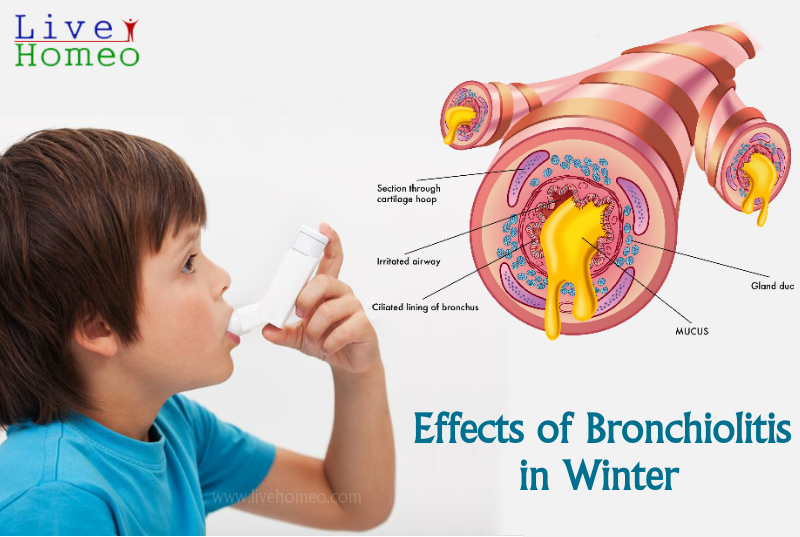 It is a viral infection of bronchioles seen in infant and young children mostly. Bronchioles are the small airways present in the lungs, hence it is also treated as one of the lung infections. These airways when get infected with virus inflames and leads to congestion. Though it starts like cold in early stages, but when progressed it leads to symptoms like wheezing, difficulty in breathing, persistent cough and in some cases also leads to severe lower respiratory illness. Bronchiolitis in children can be of two types like acute and chronic. It is commonly caused due to respiratory syncytial virus (RSV). Bronchiolitis symptoms include breathlessness, wheezing, mild fever and fatigue along with common cold symptoms like cough, cold and runny nose. Children who did not take enough fluids and feeding may also face weakness and dehydration problems. Few risk factors which can make your child more vulnerable include low immunity, premature birth, exposure to smoke (especially cigarette), problems with heart and lung conditions and staying in crowded places.

There are actually two types of bronchiolitis, namely

Bronchiolitis is contagious disease and just like cold spread from infected one to another. In order to eliminate the risk, it is vital to keep your children away from infected persons, avoid exposure to smoking and maintain hygiene. Though in most of the cases children get better without any treatments, in few cases children may need to be hospitalized. If the symptoms are severe and if your child has low immunity due to premature birth and so on, it is crucial to get them diagnosed.

It can lead to complications like cyanosis (a condition skin and lips of your child turns to blue due to lack of oxygen) and respiratory failure. In few children bronchiolitis can damage the cells present in the airways. In this case children faces problems like coughing and wheezing and it takes few months to recover. Though it does not lead to any long term affects, but repeated bronchiolitis in childhood can increase your child’s risk of asthma in later stages.

Age group of people who get effected with Bronchiolitis

In most of the cases bronchiolitis is seen among infants and children below age 2 years. In rare cases it is also seen in adults and this condition is called as bronchiolitis obliterans or constrictive bronchiolitis. This can be caused due to respiratory infections, inhaling toxic fumes, connective tissue disorder and so on. In this condition adult face scarring in the airways in lungs or bronchioles and it can’t be reversed. This scarring blocks the airways and leads to breathing disorders.